By Robert A. Vella

The term pizza was first recorded over a thousand years ago in Italy, but people have been enjoying baked flat breads with toppings much earlier than that.  For most of that time, pizza was a simple preparation accented primarily with olive oil, herbs, and occasionally cheese or other ingredients.  Tomatoes didn’t start appearing on pizza until the 16th century, or later, after the New World fruits were brought to Europe.  Therefore, pizza was – and always has been – principally about bread.

It is precisely that – pizza as a bread dish – which is the focus of this perspective on one of our most popular food creations.

As a first generation Sicilian-American, I’ve been making pizza since childhood.  My mom taught me initially, and I’ve worked as a pizza-maker in two Italian restaurants.  Yes, I can twirl pizza dough (much to my home economics teacher’s delight in high school), but there are other ways to evenly spread out the dough without spraying flour all over your nice clean kitchen.  To illustrate an example of pizza’s traditional roots, my mom would make a pan version rubbed with extra-virgin olive oil, garlic, fresh oregano, salt & pepper, and optionally sprinkled with grated Parmesan cheese or topped with a few anchovy fillets.  It may be overly simplistic for today’s complex preferences, but there is no better way to highlight the essential qualities of good bread than this method.  To our family, no kind of pizza was more cherished nor appreciated.

If pizza was a biological species, its genetic diversity would be rather impressive.  Pizza is made all over the world and with incredible variation utilizing local ingredients and tailored to regional tastes.  So, the following stylistic critiques will center on the proper preparation of pizza rather than the choice of toppings.

As a general rule, pizza commonly comes in four basic categories these days:

If you prefer the mass-produced, highly-processed, low-quality commercial pizzas which dominate the market, then the rest of this post might not interest you.  Although I admit some are definitely better than others, that will be my final comment on this category.

Likewise, I won’t be discussing artisan pizzas in depth.  While the best of these are truly innovative and spectacular, the category is too broad to cover here in any comprehensive way.  Although, I would like to mention a northern Italian inspired pizza I had once with pancetta, heirloom tomatoes, and a white bechamel sauce – it was marvelous!

That leaves us with New York style versus Chicago style.  Let the debate begin.

New York style pizza emerged in the early 20th century as a larger Americanized version of Naples’ pizza margherita which could be served to customers by the slice instead of whole.  It differs from its classic Italian antecedent by using canned tomatoes instead of fresh, low-moisture mozzarella instead of fresh mozzarella, dried oregano instead of fresh basil, and a much softer crust.  New York style pizza is so soft, in fact, that patrons typically fold a slice in half lengthwise in order to eat it.  To a Neapolitan, this is sacrilegious and I must agree.  Pizza bread should be crusty on the outside and tender on the inside.  Another criticism of New York pizza is that it often has an overabundance of cheese – to the point where it resembles a bubbling pool of lava right out of the oven.  Like any other culinary exercise, proportional control of the ingredients is key.

If you’ve never experienced pizza margherita, I strongly suggest you try it sometime.  It might be heretical for a Sicilian descendent to admit this, but I’ve never tasted a better pizza.  The flavor combination is simply superb.

The roots of Chicago style deep-dish pizza are less clear.  While it can be traced back to the beginnings of Pizzeria Uno between1943 and 1955, the dish’s inspirational source remains something of a mystery.  I suspect that the desire for a thicker, heartier pizza was derived from the city’s Sicilian immigrants who made large pan pizzas for their families.  Deep-dish, however, is much thicker and in many ways represents a radical departure from traditional pizza.  It’s an elaborate construction of dough (which may contain corn meal), Italian sausage, mozzarella, and tomato sauce.  Since this pizza must be baked for a longer time (at a lower temperature), the sauce is added last so that the cheese won’t harden or burn.  In my opinion, too much sauce is used and putting corn meal into the dough is anything but traditional.  Still, there is a satisfying quality to this pizza which I find superior to the New York style.  But, it is – after all – strictly a matter of personal taste. 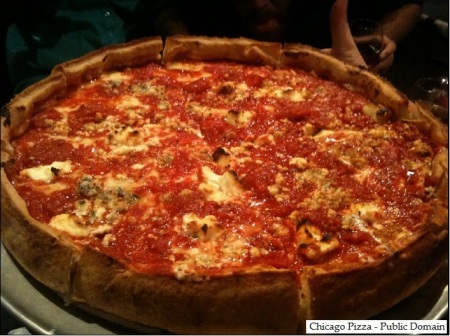 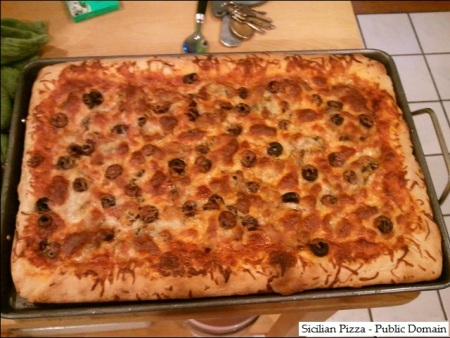 Sicilian pizza is surprisingly easy to make at home, and it allows amateur cooks to be quite creative in their choice of ingredients.  Once you’ve done it a couple of times, and learned the do’s and don’ts, you probably won’t be ordering take-out from any crappy pizza chain restaurant much anymore.  The following example was completed in less than 3 hours elapsed time, serves 4 at a total cost of under $10 (no more than $1.25 per slice!).  Note:  precise recipes are widely available online for the pizza dough and tomato sauce components.

Remember, the keys to great pizza are:  quality ingredients, proportion control, and skillful execution.  The crust should not be crispy like a cracker, nor soft like a limp noodle.  The sauce should not be too acidic nor too sweet.  Do not put on too much sauce, cheese, too much nor too many toppings.  Find the right balance.

Pizza Dough:  In a large bowl, mix 2 tbsp. active dry yeast, 1 tbsp. each of all-purpose flour and granulated sugar, with enough warm water to form a slurry.  If little bubbles form after a few minutes, you’re good to go.  Add 2 cups all-purpose flour and 1 tsp. salt.  Begin mixing, and slowly add warm water just until the dough no longer sticks to your hands.  Kneed the dough for about 5 minutes to develop the gluten (texture).  Form the dough into a ball, rub with a little olive oil (to prevent sticking), and place in a large clean bowl covered with plastic wrap (to keep soft).  Set aside, and let it rise in room temperature to about double its original size.

Marinara Sauce:  Saute 6-8 chopped ripe Roma tomatoes, 1/4 diced yellow onion, and 3-4 diced garlic cloves in 2 tbsp. olive oil until lightly caramelized (stir to prevent burning).  Add a sprinkle of dried or fresh (finely chopped) oregano and basil leaves, a pinch of crushed red pepper flakes, and salt & pepper to taste.  De-glaze the pot with a few dashes of red wine, and simmer over low heat until the sauce reduces to the desired thickness.  Turn off heat, and set aside.

Lightly grease a 15″ x 10″ shallow baking pan with olive oil.  Add the dough and stretch it out with your fingertips. 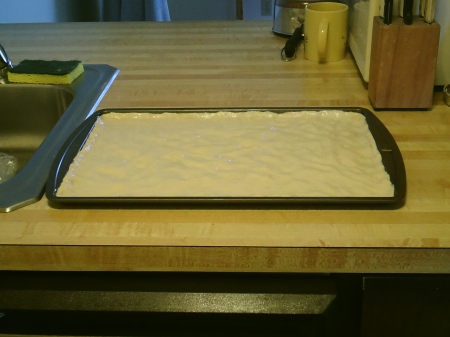 Add the sauce and spread it out evenly without spilling over the edges of the dough. 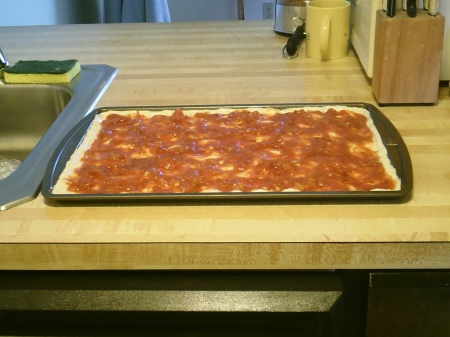 Sprinkle the parmesan cheese over the pizza along with a little oregano.

Bake at 425F for 25-30 minutes, and let cool for about five minutes before slicing. 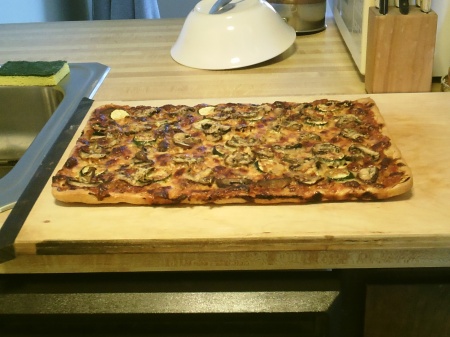